World's 7 most spectacular terminals revealed, you want to be delayed 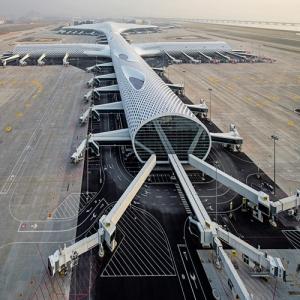 No one particularly likes airports, particularly when flights are delayed and tempers are frayed. But at least if you find yourself waiting around at one of these architectural anomalies you will have a spectacular view to admire. Showcased in a new book, The Art of the Airport, these terminals feel much more like modern art museums than the poorly lit, transport halls we are more accustomed to.

China's Shezhen Bao'an airport was designed by architects who built it to evoke the image of a manta ray, and 'to celebrate the emotion and fantasy of a flight.' The interior of Shezhen Bao'an Airport, where the profile of the roofing is characterised by variations in height alluding to the natural landscape.