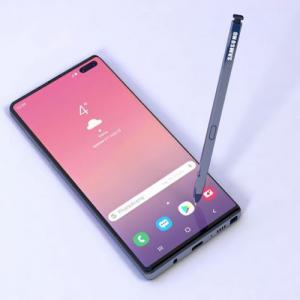 The Note 10 series will not have a 3.5mm headphone jack and since there is no rear-mounted fingerprint sensor, the series might have an in-display fingerprint scanner. Samsung has removed the Bixby button and there is a Type-C port at the bottom along with a SIM card slot, speaker grille and an S-Pen slot.

Earlier reports suggest that Galaxy Note 10 Pro will feature a 6.75-inch screen whereas the Note 10 will have a 6.3-inch AMOLED display. The phones are also said to have a 4,500mAh battery with support for 45W fast charging. Both the devices are expected to be powered by Samsung's own Exynos 9820 processor whereas the US market will have Snapdragon 855 powered Note 10 lineup.