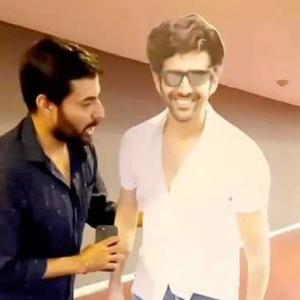 Kartik Aaryan is undoubtedly one of India's favorite superstars who is constantly making waves with his rising stardom. It is probably the efforts of the fan-made superstar also that he never fails to show his gratitude to his fans. One such example was certainly witnessed when he responded to a viral video of a fan who carried his cutout to welcome a friend at the airport.

While taking to his social media, Kartik shared the viral video of a fan and responded on the same with his witty charm. The actor wrote in the response -


Currently, Kartik is trending all across the nation for the teaser of his upcoming Freddy and Shehzada. The actor truly left everyone in surprise by bringing two distinct characters one being intense in Freddy while the other one is a massive action entertainer in Shehzada.

On the work front, as Freddy is set to release on 2nd December, Kartik will also be seen in Shehzada, Captain India, Satyaprem Ki Katha and Kabir Khan's untitled next.