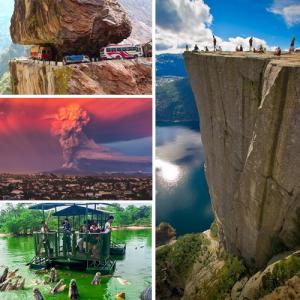 Traveling around the world is a great way to spend your vacation time, but not all cities are as charming as the ones in the travel brochures. While every large city has its problems, some are a little worse than others. Here are list of  most dangerous cities in the world.

Mount Everest
So many people who dream of climbing Everest at least once in their lifetime. Only in 1953, Sherpa Tensing Norgayall and Edmund Hillary from New Zealand triumphed over the highest peak of the mountain. After that time, lots of expeditors mounted Everest at a high risk for their lives.

Kabul, Afghanistan
No amount of US intervention and troops on the ground has rescued Afghanistan and its capital Kabul, the world's most dangerous place in our list. Today we can observe such problems as insurgent activities and kidnapping. They can be really dangerous for those who intend to spend holiday in this country.

Honduras
Honduras is a magnificent country with charming nature but still it remains one of the most hazardous places to go on vacation. This country strikes its visitors with the rate of crimes and health problems. Some of the diseases, such as malaria is widespread here.