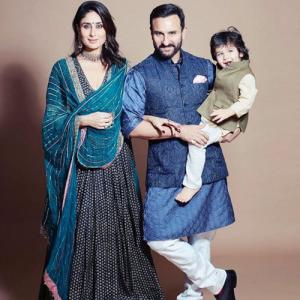 Kareena and Saif fell in love on the sets of Tashan (2008). The Tinseltown was abuzz with the news of their fiery romance and it had all started when they were spotted together outside a club in Bandra. Just a year into the relationship, Saif took the bold step of tattooing Kareena's name on his forearm. After dating for five years, on October 16, 2012, the duo had sealed the deal in an intimate wedding.

Recently Kareena revealed an interesting detail about her love story with Saif. She shared that Saif proposed to her, but every time she said she don't know. In Kareena's own words, "He did tell me that 'I think we should get married'. He told me that in Greece and he told me that in Ladakh as well. And at that time I was like 'I don't know because I don't know you'. So it was not really a 'no' but it was more like an 'I want to know you better." Kareena further called it the best decision of her life.