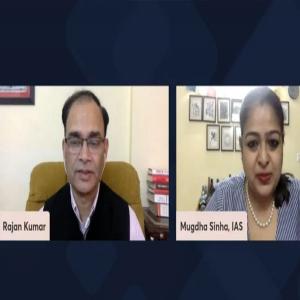 Jaipur। An intense session was organized by IAS Association, Rajasthan on their online platform. The conversation was with Dr. Rajan Kumar, Associate Professor for the subject Centre of Russian and Central Asian Studies in SIS, JNU, New Delhi
.It was based on the relations that Ukraine and Russia has been sharing since history and today, about how their relations can be connected with today's crisis both the countries are facing.  He was in conversation with IAS Literary Secretary, IAS Association, Rajasthan and Secretary & Commissioner, Department of Science and Technology, Government of Rajasthan, Ms Mugdha Sinha.

Speaker pondered upon the historical perspective of relationship between Ukraine and Russia.
Ukraine was initially a part USSR (present time Russia) which was having various geopolitical advantages due to direct access with sea through Ukraine.
Later, Ukraine became independent leading to first point of conflict between both the countries.

It was further discussed that Ukraine and Russia share hundreds of years of culture, linguistic and familial linkage. As a part of the soviet union, ukrain was the second most powerful soviet republic after Russia and therefore it was crucial strategically, economically and culturally.

Ms. Sinha inquired about connection between Russia's cultural values and does this war will hint us to reimagine Russia in accordance with its culture?
To which speaker responded quoting the demands that the Russia is putting forward for its national interest.