The scientific reason behind bells in temples 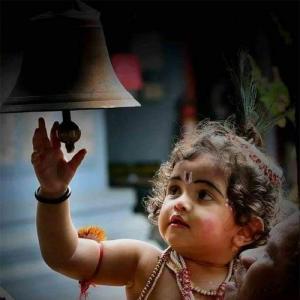 Traditionally, the bell was supposed to be rung before starting worship, with an intention that the divine enters you and all demonic forces within your soul depart, and so do the ones outside it. Most of the old temples have large bell at the entrance of the temple and you need to ring it before you enter temple. Bells are important symbols in Hindu worship. Each temple, or mandir, generally hangs at least one metal bell at its entrance for devotees to announce their presence to the Hindu deities. Priests or devotees ring more bells within the temple during worship in order to invoke the gods.

Significance
Temple bells come in a variety of shapes, sizes and metals, though brass is common. The bells' chimes are believed to replicate the sound of Aum, the all-seeing and all knowing presence across the universe that is synonymous with the name of God.