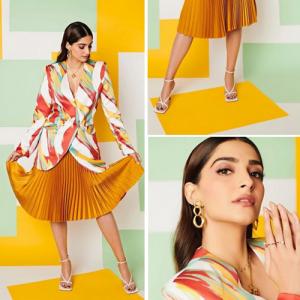 Sonam Kapoor is one such actress whose fashion statements are always top-notch. Given the fact that Rhea and Sonam are both fashion enthusiasts and own a brand named Rheson, splurging comes naturally to them, and trust Sonam to make the best fashion choices ever. Recently, the actress wore a blazer for the 7th Anniversary of Bhaane, Anand's brand. For the unversed, Sonam wore a yellow pleated midi-skirt with an oversized abstract jacket. However, her heels are what costs the most.

Sonam Kapoor wore ivory-coloured Bottega Veneta heels which cost around Rs 59,350. Imagine, just for the heels. As they say, shoes, heels, basically footwear is a sensitive subject for girls, and they pay keen attention to the same. Owning a Bottega Veneta is such a trend and favourite of each celeb, so it's no wonder that Sonam spent so much.