Sushant Singh`s final film Dil Bechara to release on July 24, Hotstar makes it free for all 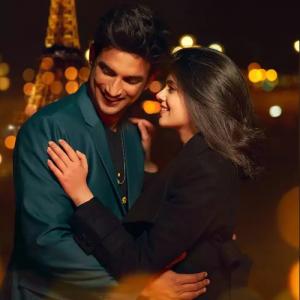 Dil Bechara, which is Sushant Singh Rajput's final film, will release online. Streaming platform Disney+ Hotstar announced that the film, which marks casting director Mukesh Chhabra's directorial debut, will begin streaming from July 24. "A story of love, hope, and endless memories. Celebrating the late #SushantSinghRajput's legacy that will be etched in the minds of all and cherished forever. #DilBechara coming to everyone on July 24," the platform's tweet read.

Dil Bechara, which is the official remake of John Green's bestselling novel The Fault In Our Stars, will mark the debut of Sanjana Sanghi in a leading role. She was devastated by Sushant's death and called their film ‘a gift that everyone is yet to see' in a recent Instagram post.

Sharing the news of the release on Instagram, Sanjana wrote that the film will be free for all to watch. "For the love of Sushant and his love for cinema, the movie will be available to all subscribers and non-subscribers," she wrote.

Mukesh said in a statement, "Sushant was not just the hero of my debut film as a director, but he was a dear friend who stood by me through thick and thin. We had been close right from Kai Po Che to Dil Bechara. He had promised me that he would be in my first film. So many plans were made together, so many dreams were dreamt together but never once did I ever imagine that I would be left alone to release this film. He always showered immense love on me while I was making it and his love will guide us as we release it."