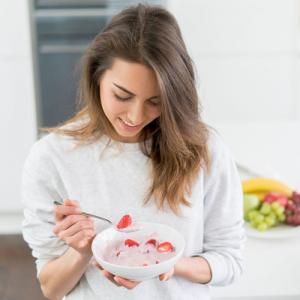 Consuming natural yoghurt on a daily basis may reduce the risk of breast cancer, according to a new study which says the probiotic supplement may help replace harmful inflammation-causing bacteria with beneficial microbes present in the food. Researchers, including those from Lancaster University in the UK, said their idea - as yet unproven - is supported by the available evidence that bacterial induced inflammation is linked to cancer.

According to the study, published in the journal Medical Hypothesis, bacteria induced inflammation in breast ducts disturbs undeveloped cells, or stem cells, waiting to mature into specialised ones, and may be a cause of breast cancer. "There is a simple, inexpensive potential preventive remedy, which is for women to consume natural yoghurt on a daily basis," said study co-author Auday Marwaha from Lancaster University.

According to the research team, the lactose fermenting beneficial bacteria, or microflora, commonly found in yoghurt, is similar to those found in the breasts of mothers who have breastfed. "We now know that breast milk is not sterile and that lactation alters the microflora of the breast," said Rachael Rigby, study co-author from Lancaster University.
"Lactose fermenting bacteria are commonly found in milk and are likely to occupy the breast ducts of women during lactation and for an unknown period after lactation," she added.