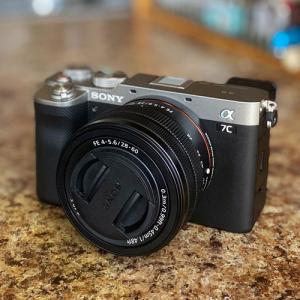 The new Sony Alpha 7C can capture 4K footage and comes with AI-driven real-time tracking and eye-autofocus. The company claims that the device is designed for vloggers and video creators who want easy functionality. The device sports a 3-inch TFT touchscreen with 9,21,600 dots. The display can also be swivelled to set the frame, which is a very useful feature for vloggers.

Sony Alpha 7C comes with a 35mm full-frame Exmor R CMOS sensor with a 24.2MP resolution and it uses the BIONZ X image processor to deliver still images and movies from ISO 100 to ISO 51200. It can take pictures in JPEG and record videos in RAW (Sony ARW 2.3 format). There are multiple image quality modes that creators can choose from, including RAW (compressed/ uncompressed), JPEG (Extra fine/ Fine/ Standard), RAW, and JPEG.