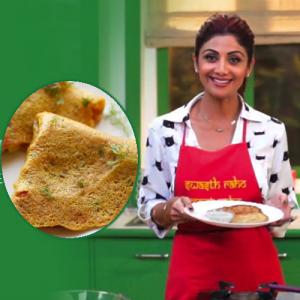 Oats are known to be among the healthiest grains. They are gluten-free and a rich source of vitamins, minerals, fibre and antioxidants, according to Healthline. They promote weight loss while keeping blood sugar levels and cholesterol levels under control, reducing the risk of heart disease. Shilpa Shetty share the recipe of chilla (pancake) for breakfast. Instead of following the usual recipe, she made the dish with oats. If you are bored of eating oatmeal with milk, you can use it to make healthy chillas for breakfast or have as a snack. Here’s a recipe by Shilpa Shetty that you can try.

How to make:-
In a flat pan, put the oats and roast till slightly brown. Transfer the roasted oats in a mixer and grind to make a powder. To this, add butter milk. Now add ginger paste, cumin powder, green chilli, pepper, coriander powder, red chilli powder and salt as per taste. Blend the ingredients in the mixer. Transfer the batter to a bowl. Oil a pan, and put a portion of the batter on it. Put it on medium flame and cover it for some time.