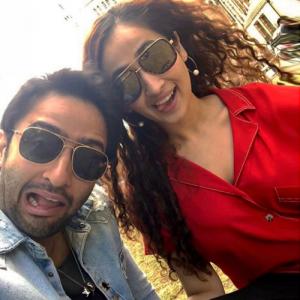 Shaheer Sheikh made his relationship with girlfriend Ruchikaa Kapoor Instagram official. Shaheer Sheikh to found love in Ekta Kapoor's friend, Ruchika Kapoor. Shaheer has finally confirmed that he is dating  Ruchikaa. The actor shared a photo with his ladylove to put and end to the speculations that have been going about his love life since quite some time.

"Here you go... after all the morphed pictures, thought of saving you all some time," Shaheer wrote while sharing the photo. The couple can be seen making a goofy face in the adorable snap. Fans have flooded the comments section with their messages. The post has received over 2 lakh likes within few hours.

Ruchikaa is the Creative Producer & Executive Vice President at Balaji Motion Pictures Ltd. Shaheer and Ruchikaa were spotted together for the first time in London during the shoot of 'Judgementall Hai Kya' in 2018. Kangana Ranaut and Rajkummar Rao played the lead roles in the black comedy, which was produced by Ekta Kapoor.