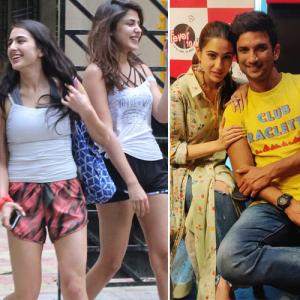 Rhea Chakraborty was arrested last Tuesday by the Narcotics Control Bureau on charges that she organized drugs for Sushant Singh Rajput. She was described as an "active member of a drugs syndicate" by the drugs probe agency.

Sara Ali Khan and Rhea Chakraborty frequently partied at Sushant Singh Rajput's Lonavala farm, Raees, manager of the framhouse, told, corroborating some of the claims of a local boatman.

In his statement to the Narcotics Control Bureau (NCB), the boatman, Jagdish Das, has claimed that the scenic location was a party destination for Rajput, his core team and Bollywood friends like Rhea Chakraborty, Sara Ali Khan, Shraddha Kapoor, and arrested drug-peddling suspect Zaid Vilatra, among others.

He also alleged that ganja and liquor were common in their island parties. An escapist retreat dotted with lakes, cliffs, dams, islands, and caves, Lonavala is now on the NCB radar in connection with the drug angle in Rajput's death case.

Raees, a manager at the late actor's farmhouse since September 2018, insisted the place and its picturesque surroundings were frequented by Rajput's core team plus Rhea Chakraborty and Sara Ali Khan.