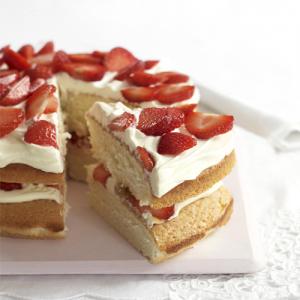 Royal pastry chefs from Buckingham Palace just revealed the recipe for Queen Victoria's favourite teatime sponge cake, also eaten during the customary royal garden parties. The recipe was shared via the royal family's official Instagram account. Queen Victoria used to regularly eat a slice of the sponge cake with tea, every afternoon, revealed Buckingham Palace. Over the years, the cake came to be known as Victoria sponge cake.

How to make:
Sponge:
- Preheat the oven to 180C (375F, gas mark 4)
- Grease and line two 8 inch cake tins (if you only own one tin, you can bake the sponge and slice in half)
- Cream the caster sugar, vanilla essence and softened unsalted butter until light and fluffy
- In a separate bowl whisk the eggs
- Gradually add the beaten eggs, a little at a time, to avoid the mixture from curdling
- Sieve the flour and fold into the mixture
- Divide the cake mix between the two cake tins and smooth
- Place on the middle shelf of the oven and bake for approximately 20 minutes, until the cake appears golden brown
- Insert a skewer and ensure it comes out clean
- Remove the sponges from their tins and leave to cool

Buttercream:
- Cream the softened butter with the sieved icing sugar and seeds from the vanilla pod (or vanilla essence)

Assembling the cake:
- Ensure that both sponges are completely cold before spreading a layer of jam onto the surface of one sponge
- Spread a thick layer of buttercream on top of the jam (if you prefer this can be done first)
- Gently place the second sponge on top and gently press down
- Sprinkle with icing sugar and serve