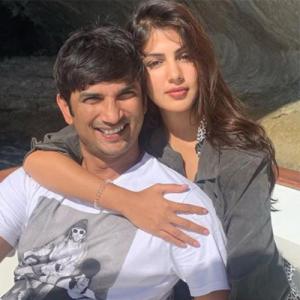 Six more persons were arrested from Mumbai on Sunday by the Narcotics Control Bureau (NCB) probing the drug angle in connection with actor Sushant Singh Rajput death case, taking the total count of people held so far to 16, an official said. The six accused have been identified as Karamjeet Singh Anand, Dwayne Fernandes, Sanket Patel, Ankush Anreja, Sandeep Gupta and Aftab Fateh Ansari, he said, adding that they were picked up after their names emerged during investigation.

Rhea Chakraborty has seemingly not just revealed names of Bollywood celebrities involved in a drug scandal but has also spilled details of their involvement with Sushant Singh Rajput to the Narcotics Control Bureau. Reports doing the rounds on entertainment portals claim that the actress named a top filmmaker who introduced Sushant to drugs and even took him along to parties where he could procure and consume cocaine, LSD and Marijuana. According to a report, Chakraborty alleged that the late actor had told her about the same during their relationship.