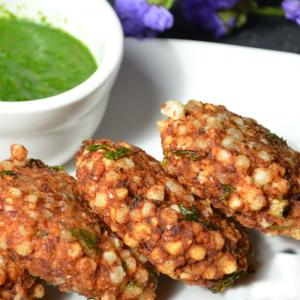 As the celebration of Navratri has begun from today hence people are observing fast to please Maa Durga. There are people who keep fasts for whole nine days while others keep only one or two fasts. During fasts, people eat only those food that can be eaten in fasts. For such purpose, Sabudana potato cutlets are great option. To make these cutlets, sabudana or sago pearls are mixed with potatoes. Then balls are made from mixture and then deeply fried. You can enjoy these tasty crispy cutlets with coriander chutney. Make delicious sabudana potato cutlets easily with this recipe.