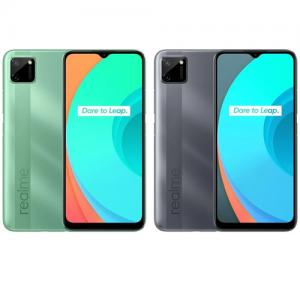 Realme unveiled the Realme C11 in India. The smartphone is touted as the world's first smartphone to feature a MediaTek Helio G35 processor. Keeping aside the insides, the Realme C11 sports a whole new camera module, that ditches the traditional vertical design and flaunts a square-shaped module, which houses two sensors and a led flash. The Realme C11 was launched at Rs 7499 in India. It is available in two colour options such as Rich Green and Rich Grey colours. The smartphone will go on sale on July 22 via Flipkart and realme.com.

It features a 6.5-inch HD+ waterdrop notch display with a resolution of 720x1600 pixels. It has an aspect ratio of 20:9 and a screen-to-body ratio of 88.7 per cent. Realme C11 is powered by MediaTek Helio G35 processor, paired with 2GB of RAM and 32GB of storage capacity. It comes with a single RAM variant of 2GB.