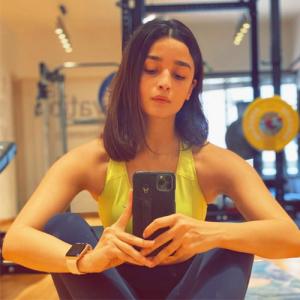 Karan Johar has confirmed Ranbir Kapoor turned into Alia Bhatt's personal hairstylist to give her a new makeover. Over the weekend, Alia Bhatt revealed she had a stylish makeover during the lockdown. The Brahmastra actress to Instagram and flaunted her new short hairdo. For the longest time, we've seen her flaunt her long locks. However, Alia decided to chop them short over the weekend and we are loving the new look. While fans went gaga, questions of who gave her a chic makeover arose. Given her Instagram caption, where she thanked her 'multitalented loved one' who rose to the occasion, fans were quick to assume that it was Ranbir Kapoor.

Though the actress has been tight-lipped about it, Karan Johar spilled the tea on his Instagram Live session. The filmmaker hosted a quick live with his mother and children by his side. During his interaction with fans and fellow colleagues from the industry, KJo might have accidentally revealed that it was Ranbir indeed who helped Alia get her summer 2020 look. The filmmaker not only admitted that the actress managed to turn Ranbir into her personal stylist but also revealed that she is in a happy space during this lockdown.