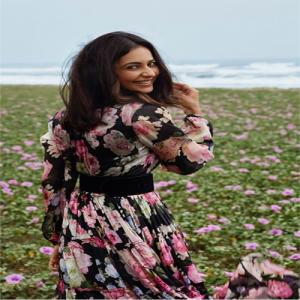 As uncertainty looms over the lives of people around the globe amid the coronavirus pandemic, actor Rakul Preet Singh believes the grim scenario has brought family members closer to each other. It's only fitting that Singh's upcoming film "Sardar Ka Grandson", slated to be released on Netflix on Tuesday, celebrates the unconditional love among kin.
The movie narrates the story of a US-return grandson (Arjun Kapoor), who will go to any lengths to fulfill his aging grandmother's (Neena Gupta) last wish.
In the Kaashvie Nair-directed film, Singh plays Radha, an independent strong woman, and Kapoor's love interest.

"The emotion in the film is very universal. It's not just about a grandmother and her grandson. It's about people going to a different extent for family. It's about giving importance to your family.
"I think never before have we understood or realized the importance of family than over the last one year, ever since the pandemic has hit the globe," Singh told PTI in a Zoom interview.

"Sardar Ka Grandson" was made for the big screen, but due to the surge in COVID-19 cases, it is releasing on the streamer.
"I think as an actor each one of us in the ideal situation wants the magic of the screen and wants to have that experience. But right now we've got a platform like Netflix to be able to show this," she said.

The 30-year-old actor said the team behind the film was elated to be able to showcase a story that would bring some smiles to people's faces.
"We're really happy that through this platform we can probably reach out and serve the purpose of bringing a smile to people's faces and families can watch together, share some laughter and some great memories. If a handful of people like it, our job is done," she said.

Billed as a coming-of-age cross-border romance, "Sardar Ka Grandson" is penned by Nair and Anuja Chauhan with dialogues by Amitosh Nagpal. It is produced by Emmay Entertainment, John Abraham Entertainment, and T-Series.