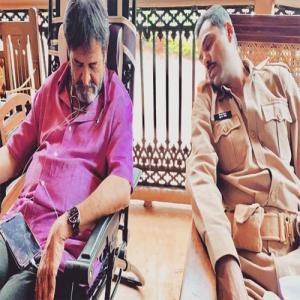 Abhay posted the picture on Instagram with the caption, "I finally did it. I slept with my director. On set with Mahesh Manjrekar. I'm a @hotstar." While Mahesh is seen sleeping on a folding chair, Abhay is seen taking a nap alongside him on a wooden armchair. Abhay is dressed in a police uniform and also sports a hairline moustache.

While Bipasha Basu, Pallavi Sharda dropped several smileys to the post, a fan wrote, "Clearly men don't cuddle!" Referring to as an example of casting couch, another wrote, "Casting chair !!!" One more fan commented, "Sleeping beauties, in between duties!"