Netflix Original EMILY IN PARIS Season 2 :WHAT TO EXPECT 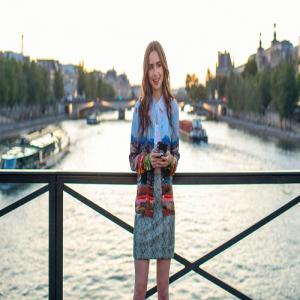 Netflix's hit comedy-drama 'Emily in Paris' creator Darren Star said that Emily (Lilly Collins) will assimilate more to French culture in Season 2 to assure the French critics who said the drama didn't showcase the culture in a way it should have. After the success of 'Emily in Paris', Netflix is all set to renew the popular romantic comedy series for the second season. The news broke in November 2020- less than two months after the launch of the show that created an online stir and drew a sniffy response from French critics.

According to Variety, the show has been a strong performer for Netflix in the viewership department, breaking into Nielsen's list of the top 10 most-watched streaming shows for the week after its premiere. But, despite the popularity, the show was also met with critique for its handling of French culture, with some saying the series showcases a glamorized view of Paris through an American girl's eyes, according to Variety.

Breaking the silence on if the same would happen in season 2, the show's creator Darren Star said to Variety, "For me, it's the evolution of the character. I think when someone goes to Paris for the first time, they are overwhelmed by the beauty of the city and that's what they're seeing."

He shared, "I think, perhaps, a lot of viewers who lived in Paris for a long time didn't quite understand that this was through the lens of a character who was experiencing the city for the first time. That's how she was perceiving it -- she was struck by the beauty that was all around her."

The show that is shot entirely in Paris and other parts of France revolves around the life of a girl named Emily who is ambitious in her twenties working as a marketing executive in Chicago. She unexpectedly lands a job in Paris when her company acquires a French luxury marketing company. As the story proceeds, Emily gets tasked with the revamping of the social media strategy of the company and then embarks on a new life in Paris.

Teasing the titular character's journey in the second season, which just began production on Monday and will shoot in Paris, St. Tropez, and other locations in the South of France, Darren told, "Certainly, the more quotidian aspects of life start to come in and I think that's what's going to happen to her." In its forthcoming season, Darren shared that Emily will have to continue to adjust to French culture, but "that's not a response to the viral reaction to Season 1".

"The first season didn't cover that much chronological time," Darren admitted while speaking to Variety, meaning the episodes largely captured Emily's arrival in Paris, focusing heavily on her awe of the city. Darren further explained that the coming season will see Emily embracing the city a little bit more, while also still struggling with her French.

"When she got there, she got a bit of a free pass in the beginning and I don't think it will be quite as easy for her in the second season. I think she will be more assimilated, in terms of living in Paris and stepping up to the challenges of learning the language," he shared. While teasing about the romantic plot, the 59-year-old shared that there are "many unexpected storylines" for Emily in the upcoming season. "There was a twist a the end of the first season that she did not see coming, and I think there's a lot of fallout that happens from the that in the new season," Darren told Variety, alluding to the cliffhanger with her chef love interest, Gabriel (Lucas Bravo).

The show has not set a premiere date for its next season yet, but to celebrate the beginning of production, Collins released a statement on the show saying it was an honor for her to be associated with a project that provided people with some much-needed relief during a trying time when everyone was looking for a reason to smile and laugh.

"Not only did playing Emily teach me more about myself, but also about the world around me. I couldn't be happier to be back in Season 2 to expand upon those lessons, to continue to grow, and learn even more about this beautiful city and all of its character with Emily," she said at that time, according to Variety.