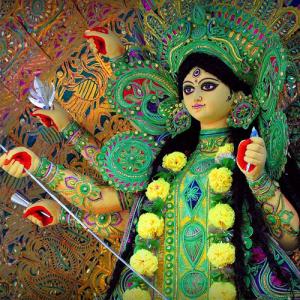 Navaratri is a festival dedicated to the worship of the Hindu deity Durga. The word Navaratri means 'nine nights' in Sanskrit, nava meaning nine and ratri meaning nights. During these nine nights and ten days, nine forms of Devi are worshipped. The tenth day is commonly referred to as Vijayadashami or "Dussehra". Here is a list of do's and don'during Navaratri.

Do's during Navratri:-
Go to temple or do puja to Maa daily in the morning and evening by lighting lamp and offering flower and doing arti.

Give some home made bhog to Gods every day; if not possible then milk and fruits should be offered.

Offering water to the Goddess is considered to be very auspicious during Navratri.

Offer some gifts to your Girls, preferably below 10 years of age as younger girls are considered as Avatar's of Goddess.

Chant all the mantras as well as slokas of Maa Durga and pray to cleanse your Past Karmas.

TAGS : navratri 2020, what to do and what not to do, do and donts during the auspicious occasion of navratri, navratri vidhis, navratri special, spirituality, ifairer