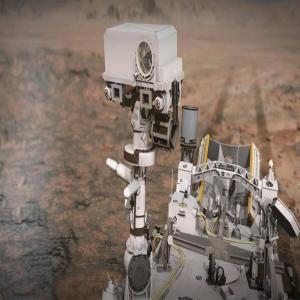 NASAs Jet Propulsion Laboratory (JPL) released two historic audio recordings from the surface of Mars on Wednesday.In the first audio clip, recorded using the Perseverance Mars rovers two microphones listeners can hear wind.    They obtained the audio from the instrument on Feb. 19, around 18 hours after landing on the planet's Jezero Crater.   NASAs Perseverance Mars Rover tweeted thatYoure listening to the first audio recordings of laser strikes on Mars. These rhythmic tapping sounds heard by the microphone on my SuperCam instrument have different intensities that can help my team figure out the structure of the rocks around me.  Things are sounding really good here. Listen to the first sounds of wind captured by my SuperCam microphone. This mic is located at the top of my mast. For this recording, my mast was still down so the sound is a bit muffled.