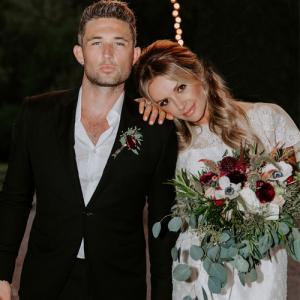 Country singers Michael Ray and Carly Pearce have tied the knot. According to the People magazine, the couple exchanged wedding vows in front of about 100 family members and friends on a Nashville-area farm. The wedding came shortly after the couple obtained a marriage license in Nashville on September 9. Ray, 31, and Pearce, 29, announced their engagement on Instagram in December 2018 with photos from the proposal. They confirmed their relationship in July 2018 on the photo/video-sharing website.

Michael Ray Roach is an American country music singer and songwriter. He is signed to Warner Music Nashville. He has released two albums for the label: Michael Ray and Amos. Carly Cristyne Slusser known as Carly Pearce, is an American country music singer based in Nashville. Her debut single, "Every Little Thing", peaked at number one on the US Country Airplay chart.