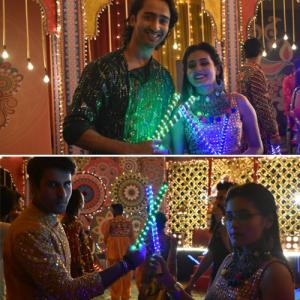 Yeh Rishtey Hai Pyaar Ke is soon going to see a grand Navratri celebration. The viewers and the avid fans will get to see the dandiya battle between the loving couples of Yeh Rishtey Hai Pyaar Ke. Abeer-Mishti and Kunal-Kuhu will have their dance competition on the dandiya night. On the other hand, a big twist is waiting for Meenakshi. Mehul will play his smart move against Meenakshi where he will fix Abeer's marriage alliance with Mishti. The wedding news will ruin Meenakshi's navratri.

Mehul praise for Mishti because of her I got my son, my family and the reason to live. I can definitely help her to achieve her goals. Rajshri Maheshwari says in absence of Yashpal and Meenakshi how can we confirm this relationship furher. Later Meenakshi and Yashpal are left speechless when Abeer delivers some stunning news.