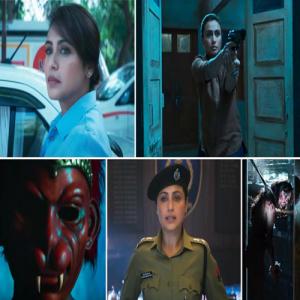 The trailer for Mardaani 2 has been released. Starring Rani Mukerji as a cop, the film appears to be a cat-and-mouse thriller inspired by real events. Rani Mukerji returns to as police officer Shivani Shivaji Roy in Yash Raj Films' Mardaani 2. With the release of the trailer, we know, this time she is out to nab a rapist. The trailer states certain facts about rape in India, "More than 2000 rape crimes are committed by boys under the age of 18 years in India every year. These are only registered cases."Rani Mukerji is a no-nonsense cop, investigating a "brutal sexual assault" in Kota city. She won't rest until she gets her hands on the 21-year-old villain who is described as "pure evil." The last sequence in the trailer, where Rani is on the lookout for the suspect, leaves you stunned. But, a few dialogues get a bit overdramatic. Overall, Mardaani 2 looks like a promising action thriller.

Inspired by true events, Mardaani 2 is helmed by Gopi Puthran who wrote Mardaani. The first installment in the franchise, Mardaani, directed by Pardeep Sarkar dealt with the issue of child trafficking in India.

Talking about the film, Rani Mukerji had earlier said, "In Mardaani 2, we will again tackle a subject that will be shocking; it will show something very real, very alarming to audiences and make them aware of what's happening in and around our lives."Produced by Aditya Chopra, the film will hit theaters on December 13, 2019.