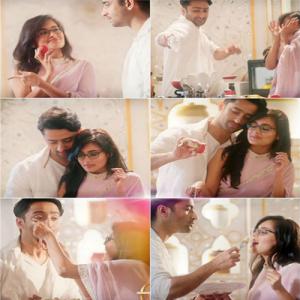 The viewers and the fans will get to see Abeer and Mishti's love and romance in the air in the coming episode. Abeer will turn master chef teaching cooking to Mishti while Mishti and Abeer will get cozy together. Abeer and Mishti will feed sweet to each other sharing warms hugs and love. The cute romantic moments of Abeer and Mishti in the kitchen will give a treat moment to the lovely fans. Unfortunately, it will be all a dream sequence by Abeer. Abeer misses Mishti and dreams recalling her while he still imagines Mishti in specs unaware of Mishti's new look.