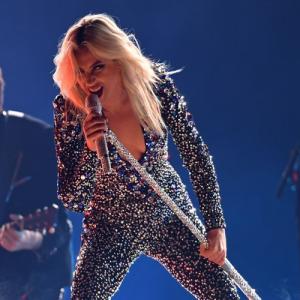 Lady Gaga is recovering after falling off the stage while dancing with a fan at a concert. During her Las Vegas show Thursday night, the pop star invited a fan onstage who picked her up and lost balance. Both plunged to the floor as a result. Moments after the fall, Gaga was back onstage with the fan and told him:"You promise me you're not gonna be sad about that, right?" He responded:"I promise." Several fans posted video of the fall and Gaga's return to the stage on social media.