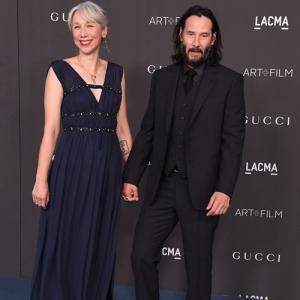 Internet can rest now as Keanu Reeves has found love in business partner Alexandra Grant. The 55-year-old actor recently stepped out with Grant for Los Angeles County Museum of Art's (LACMA) Art + Film Gala. The rumoured couple were all smiles while holding hands as they made their way down the carpet. They happily posed for the shutterbugs. For the occasion, Reeves opted for an all-black suit, while Grant, 46, looked resplendent in a navy blue gown with a plunging neckline.

Reeves and Grant have known each other for quite some time. In 2011, the two collaborated for Reeves' book Ode to Happiness, that the actor had penned while the illustration was done by Grant. Five years later, they again worked together on Keanu's follow-up book Shadows and later launched the publishing house X Artists' Books.