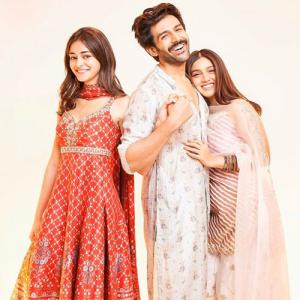 This is not the first time Kartik Aaryan has made objectionable comments towards women in his movies. In Pyaar Ka Punchnama 2, Kartik's character has another monologue, the crux of which is, "ladkiyaan hote hi kameeni hai" and "problem yeh hai ki woh ladki hai." The long tirade against women seems to have one agenda - to bash women, generalised in the film as spoilt and constantly requiring attention, and to seek out sympathy for the poor, "trapped" mard who has nowhere to go but face the wrath of his girlfriend. This isn't surprising, given that Pyaar Ka Punchnama 1, also pretty much gives off the same vibe - that women don't seem to get the angst of men, who just want to be left alone.