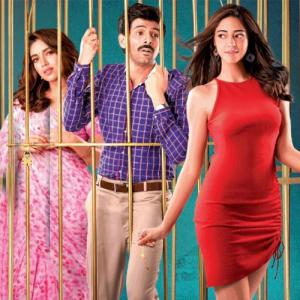 Kartik Aaryan's Chintu Tyagi says the above lines in yet another monologue in yet another crass comedy, Pati Patni Aur Woh, a genre Bollywood should have been done and dusted by now. The film, directed by Mudassar Aziz, is a remake of the 1978 classic, starring Sanjeev Kumar, Vidya Sinha and Ranjeeta Kaur and tries taking a humorous approach to adultery and extra-marital affairs.
In the brief two and a half minute trailer, Aaryan's Chintu exclaims how unfair it is when men are termed "rapists" when they manage to convince women to give in to their demands and have sex with them. Umm, isn't that what "rape" is by definition anyway? If you have to trick a woman into sleeping with you, then I hate to break it to you, that's rape.

May we also remind you that the year is 2019 and rape jokes just aren't funny any more?
In a country where crimes against women only seem to be increasing with every passing day, we surely do not need more regressive films which normalise marital rape (or, rape in general), thereby giving the men in India just another reason to justify their actions.