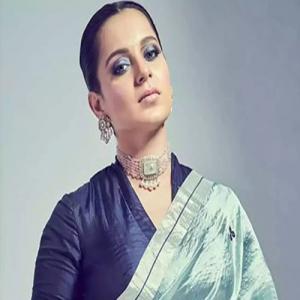 The 34-year-old actor, unfazed, accused Twitter of race bias. "I have many platforms I can use to raise my voice, including my art in the form of cinema," she told news agency ANI. She said: "Twitter has only proved my point they are Americans and by birth, a white person feels entitled to enslave a brown person, they want to tell you what to think, speak or do."

She added: "Fortunately, I have many platforms I can use to raise my voice including my art in the form of cinema but my heart goes out to the people of this nation who have been tortured, enslaved, and censored for thousands of years and still there is no end to the suffering."

In the tweet that appears to have spurred this action, the actor seems to urge Prime Minister Narendra Modi to "tame" Mamata Banerjee using his "Virat Roop" from "early 2000s" in Bengal. She was reacting to a tweet by journalist-BJP leader Swapan Dasgupta on the violence in Bengal since election results were announced on Sunday; Mamata Banerjee's Trinamool Congress - which won a landslide victory -- and the BJP have blamed each other for the clashes and arson.

The ruling TMC has won 212 of the 292 seats where polling was held in eight phases in March and April. The BJP emerged as the main opposition party with 77 seats under its belt. Trinamool Congress chief Mamata Banerjee will take oath as West Bengal Chief Minister for the third consecutive term on Wednesday, May 5.

Kangana Ranaut's tweet sparked outrage and calls for action against the strident actor, whose timeline is filled with vitriolic posts.
"We've been clear that we will take strong enforcement action on behavior that has the potential to lead to offline harm. The referenced account has been permanently suspended for repeated violations of Twitter Rules specifically our Hateful Conduct policy and Abusive Behaviour policy," a Twitter spokesperson said, adding that the rules were applied judiciously and impartially to all."As explained in our abusive behavior policy, you may not engage in the targeted harassment of someone, or incite other people to do so. We consider abusive behavior an attempt to harass, intimidate, or silence someone else's voice."

Kangana Ranaut is notorious for her outrageous, no-filter posts on social media, many of which are provocative calls to action.
The actor also posted a rant on her Instagram account earlier today but has not yet said anything about the blocking of her Twitter account.

In the teary-eyed harangue, she talks about "disturbing news, videos and photos from Bengal of people being murdered, gang-raped and their houses being burnt". She also calls for President's Rule in the state, criticizing a "government that I support" for not doing more than dharnas in response to the clashes.

On the professional front, Kangana will next be seen in her upcoming film Thalaivi where she plays late Tamil Nadu chief minister J. Jayalalithaa. The film is slated to release in Hindi, Tamil, and Telugu. It was scheduled for an April 23 release but due to the surge of the second wave of Covid19, the film has been postponed.