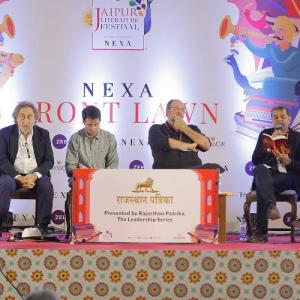 In conversation with entrepreneur Mohit Satyanand, Niti Aayog CEO Amitabh Kant talked about his latest book Incredible India 2.0: Synergies of Growth and Governance. Kant highlighted India's economic developments which establish the extent of path-breaking solutions for key sectors that can boost the country's growth, and said, "Through initiatives such as GST and Insolvency and Bankruptcy Code, we have carried out all the right structural reforms for economic growth."

Climate change is no longer impending. We are currently in the throes of a grave environmental and existential crisis and frighteningly aware of it. In a session titled "Uninhabitable Earth" presented by Centre for Policy Research at Bank of Baroda Baithak,  David Wallace-Wells John Lanchester, Marcus Moench and Navroz K.Dubash were in conversation with Prem Jha , where Wallace-Wells said, "The planet has never been as warm as it is today – which means that everything we've known as a species is a result of climate conditions that we've entirely left behind...It's almost like we've arrived on a new planet!"

At a session presented by INOX, Stephen Greenblatt, introduced by Vishal Bhardwaj, said, when asked if the state ever tried to end Shakespeare's career for his dissent: "During the time of Shakespeare, the state allowed an 'opaque screen', in which certain uncomfortable things could be expressed. The authorities knew that tearing that screen was dangerous." On being asked about Shakespeare's anti-Semitic tendencies expressed in some of his plays, Stephen Greenblatt said, "Shakespeare was not an artist of the enlightenment; he and his contemporaries were born a long time before that. You will also find instances of misogyny in his work and for example, his treatment of his wife is well-known. There is, however, a deep humanism in Shakespeare's work that he doesn't let his characters, no matter how central or peripheral, remain the 'right size'. This, to me, is more important than political correctness in the case of Shakespeare."

Knowing what we know about the severity of the current pace and scale of climate change, how best can we frame the narrative around this emergency to elicit the most proactive response, in governments and their citizens alike? This was one of the key themes that the panel grappled with. For David Wallace-Wells, on a personal level, his interest in the issue came from a place of fear. Given that his 'Uninhabitable Earth' article instantly went viral, there certainly seems to be some merit in the doomsday narrative that he adopts. Prem Jha expressed that the doom and gloom portrayal of climate change can sometimes do more harm than good, forcing people into a state of apathy. Overall however, all speakers agreed on the necessity to communicate the urgency of the crisis, since it will "shake the foundations of every aspect of modern life," Wallace-Wells warned.

"It is far worse to be governed by a corporation than a government," said Festival Co-director and historian William Dalrymple, during a session on his latest bestseller The Anarchy. While introducing the session, historian Manu. S Pillai, stated that after reading the book "you're left with really interesting questions that you've to reflect on." Dalrymple mentioned how we are taught in great detail about the period from 1857 to 1947, when actually the corporate became a government. "The East India Company built itself by taking Indian goods all around the world" and the "ridiculous trick that this financial institution played" which helped it "conquer the richest country in the world"."We have forgotten the corporate story…it's very important to remember this!" stated Dalrymple as he reminded the crowds of the corporate violence which the Company ruthlessly exhibited.

At the "Belt&Road" session, presented by the Aga Khan Foundation, journalist Manoj Joshi remarked on the process of writing a paper on the Belt Road Initiative, "I think one of the mistakes we often make, is to obsess about CPEC(China Pakistan Economic Corridor) and that CPEC is 'Belt and Road', which it is not. In fact, I would argue that neither Indian Ocean, nor Asia are the focus; the focus would instead be on Europe."

Economics has often been called the 'dismal science'. There are a lot of people who are sceptical about whether Economics can solve the big problems that confront humanity today- chief among them being poverty. The work of Abhijit Banerjee and his partners has shown that these sceptics may not be correct. The core of their work has centred around small, data-driven interventions which have the potential to solve complex problems all over the world. In conversation with Sreenivasan Jain, Banerjee shared some important achievements of his and his organisation J-PAL's journey.

The biggest problems often have simple solutions, and that is exactly what Randomized Control Trials (RCTs) conducted by J-PAL highlight. Banerjee exemplifies this by sharing an anecdote about Malaria prevention. He said that Malaria is the largest killer of children in Africa. "For many years it was known that if you have children sleep under insecticide treated bed nets they don't die of Malaria," Banerjee said. RCTs conducted in Africa showed that subsidizing bed nets or giving them for free can help increase the use of bed nets. This goes against the conventional wisdom of subsidies being inherently bad. However, this idea was put into practice, and as a result "5 million children are now not dying of Malaria world-wide," Banerjee said.