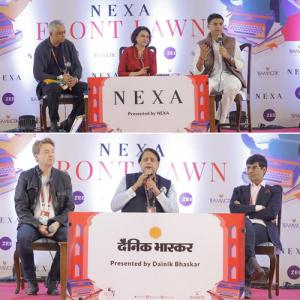 On Sunday 26 January 2020, the day four of this year's edition of the ZEE Jaipur Literature Festival unfolded at the Diggi Palace at its usual heady pace. The day's sessions were testament to the rich variety of the multiple forms of storytelling that the Festival explores, ranging from books, ideas, performances and even stand-up comedy. The day opened with a wellness session by Ekprana on Pranayam followed by Carnatic musician Supriya Nagarajan and composer & sound artist Duncan Chapman. The two came together to present a unique never-seen-before experience for audiences - bringing together the East and the West in their respective styles. Celebrating India's 71st Republic Day today,at the NEXA FRONT LAWN reverberated with the patriotic musicwhich was followed by an endearing reading of the Preamble to the Indian Constitution by two young children who were heartily joined by the audience.  Later in the day, India's leading stand-up comedian Papa CJ held the audience captive with a short stand-up session while releasing his autobiography Naked.

The Ojas Art Award, instrumental in incorporating visual arts into the programming of the ZEE Jaipur Literature Festivalk, conducted a felicitation ceremony at NEXA Front Lawn. Continuing with its tradition, Ojas Arts Awards blended Indian tradition with contemporary regional art-forms and presented the award to Odisha Pattachitra for the year 2020. The award was presented to Bijaya Kumar Parida, master artist of Odisha Pattachitra and had received the National Award for Palm-leaf engraving in 1996.

In a spirited conversation on the occasion of Republic Day, Swapan Dasgupta, Saba Naqvi and Makarand R. Paranjape, in conversation with Pragya Tiwari, talked about the Swapan Dasgupta's book Eyes Right: Awakening Bharatmata. Set on the context of a forgotten idea of India, which is deeply rooted in its culture and tradition of over thousands of years, this book dismisses the "carefully crafted stupid caricature" of "a certain way of life" popularly known as "Right Wing", according to the author. Dasgupta, Member of Rajya Sabha, author and political columnist, started the discussion saying, "There is a sense of nationhood in the pre-Constitution era of India which was inherently faded from public memory." He added that this inadequacy of information resulted in "trivialising the entire configuration" of nationalist beliefs and ideas among people. Poet, author, professor of humanities and Director of the Indian Institute of Advanced Study, Makarand R. Paranjape, added to this saying, "India's conservative side is not about a set of dogma but about looking towards the continuity and unity of a great nation and its civilisation." He added that the book is a collection to showcase the phenomenon of Hindu nationalism in terms of how it perceives itself and seeks to identify the nature of Indian conservatism, and its similarities and differences with political thought in the West. On the question of caste inequality that prevailed in the pre-Constitution era, he said, "Savarkar was the biggest denouncer of caste" and that there is "no such scuffle of cultural nationalism with constitutional nationalism".