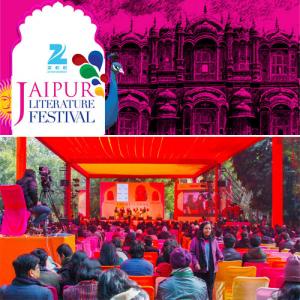 Modern Hindi fiction represents a continuum between many pasts and an emergent present. Two prominent writers evoke the landscape of change. Kamlakant Tripathi's recent novel Sarayu Se Ganga is a magnificent evocation of history and culture across the last century. Another prolific Rajasthani author Nand Bhardwaj's latest collection of short stories Badalati Sargam also covers a range of themes that highlight the quirks and contradictions of a changing society. In conversation with celebrated Hindi author Anu Singh Chowdhary, they will speak and read from their new work.

An inspirational session titled "The Rivers, The Sky, The Self", with four writers from north-east India, will speak of the landscape of memory, evoking folklore, oral narratives and the histories of their people. The panel consists of Esther Syiem, a bilingual poet, academic and playwright, who has also worked with oral scripting in Khasi;Easterine Kire, an award-winning poet, short story writer and novelist from Nagalandand author of the novelA Respectable Woman set against the decisive Battle of Kohima; and Mridul Haloi, winner of the Sahitya Akademi Yuva Puraskar in 2017 for the poetry collection Akale Aso Kushale Aso. The distinguished panel will be in conversation with academic and feminist publisher Urvashi Butalia andread from and speak of their work and the legacies of myth and memory.

Sanskrit has been the primary language of knowledge, learning and ritual in ancient and medieval India. Its rich traditions permeate most modern Indian languages, and its tremendous influence continues in every aspect of Indian life. It remains yet very much a living language, taught in schools, broadcast on All India Radio, and with over 90 publications published in it across the nation. In a splendid session,writers and scholars from across the world will discuss the grandeur, practicality and accessibility of Sanskrit and its role in the culture and daily life of modern times. The panel will feature Oscar Pujol,writer of the Sanskrit dictionaries titled Sanskrit-Catalan and Sanskrit-Spanish; Madhura Godbole, programme head of the Sanskrit Language Department at the American Institute of Indian Studies; Makarand R. Paranjape, poet, scholar and Director of the Indian Institute of Advanced Studieswho has written extensively on pre and post-colonial Indian culture politics and society; Rachel Dwyer, Professor of Indian Culture and Cinema at School of Oriental and African Studies, University of London.

The landscape of Indian literature is multilingual and multivocal with 22 official languages and thousands of mother tongues and dialects. "Many Languages One Literature" will be a session that interrogates and celebrates the unity in this diversity with three celebrated writers -Aruni Kashya, KR Meera and Shubhangi Swarup will be reading from their works in Assamese, Malayalam and English, as they discuss the literary and linguistic context of their inspirations. The Festival's multi-faceted content promises a variety of linguistic riches.