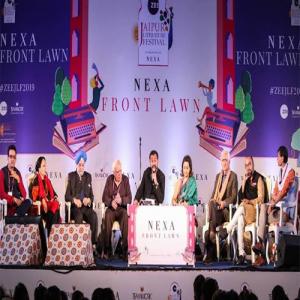 India's rich, diverse and colourful literary heritage remains at the core of the 13th Jaipur Literature Festival as it brings together writers from across India representing a multitude of the country's languages. This year, the Festival hosts speakers from the vast canvas of Assamese, Bengali, Gujarati, Hindi, Malayalam, Marathi, Nagamese, Oriya, Prakrit, Rajasthani, Sanskrit, Santhali, Tamil and Urdu writing. The programme explores the magnificent legacy of these languages while examining contemporary trends in writing.

The 13th edition of the Festival, set to take place between 23-27 January, features over 300 speakers from India as well as across the world. Conversations span the length and breadth of the country and include voices from known and lesser-known literary treasure troves searched with meticulous attention to contemporary linguistic narratives especially in the many regions of India, each with its own myriad literary traditions, norms and quirks. The idea is to sustain the incomparable vastness of our national languages amidst galloping globalisation and draw succour from an incredible linguistic and literary legacy.

Rajasthani language finds voice in its distinctive syntax and variety of dialects - the iconic Rajasthani poet Chandra Prakash Deval, a pioneer poet of Rajasthani literature Raju Ram Bijarnian, eminent authors Ritupriya and Madhu Acharyawill speak of the rich heritage and linguistic traditions of the state in a session titled "Rajasthani Binya Kyaro Rajasthan". In a conversation with distinguished author Vishes Kothari, the panel will talk about the unique genius of Rajasthani literature in its many manifestations.

In another conversation, Vishes Kothari and Chandra Prakash Deval will speak to bilingual novelist Anukrti Upadhyay on Rajasthani writer, poet and litterateur Vijaydan Detha's rich legacy of magical narratives. Detha belonged to a family of bards and contributed enormously in bringing folklore and oral traditions into the mainstream of Indian literature. This session will feature Vishes Kothari's vivid English rendering of the Timeless Tales from Marwar, a handpicked collection from Detha's celebrated Batan ri Phulwari - literally "Garden of Tales".