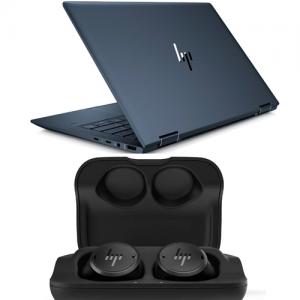 HP Elite Dragonfly G2
The updated version of Elite Dragonfly, which made its debut at CES 2021, still weighs less than 1kg but now comes with the latest 11th gen Tiger Lake processor. It also boasts 5G connectivity as well as integrated Tile tracking. The 2-in-1 business notebook, which is made of magnesium chassis, a 13.3-inch display with FHD or UHD resolution. Other new features include the Sure Shutter privacy shutter on the webcam and Tamper Lock, a physical security feature that automatically notifies the owner. The premium notebook will go on sale this month but no pricing was announced.

HP Elite Folio
The Elite Folio is HP's answer to the Surface Pro but there is a key difference between the two tablets. The Folio is powered by a second-gen Qualcomm Snapdragon 8cx 5G compute platform, meaning it is 5G-ready. And in case you want a device with insane battery life, the Elite Folio gets the job done. The mobile device will get more than 24 hours of local video playback, according to HP. And yes, it's also covered in vegan leather. The Elite Folio is expected to be available in February. Pricing was not announced.

HP EliteBook 840 G8 Aero
The HP Elitebook 840 G8 Aero is a business laptop but it's not as fancy as the notebooks in the Dragonfly series. That being said, the G8 Aero comes with everything a customer expects from a traditional business notebook. It starts at a lightweight 1.15kg and comes with an 11th-gen Intel Core processor with integrated graphics. It also comes with a built-in Tile tracker and optional 5G Wireless connectivity. The EliteBook Aero will hit retail stores in March. HP didn't announce pricing.