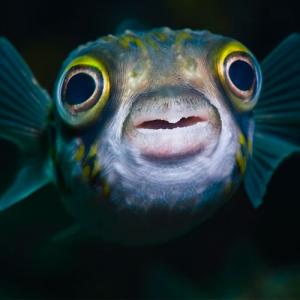 New research from a team including scientists from the University of Queensland says that the discovery that deep-sea fish can see in color in the dark sheds new light on the evolution of sight in vertebrates, including humans. Scientist Dr. Fabio Cortest says that vertebrates have two types of photoreceptor cells - rods and cones - that allow sight.

Cones are used in bright-light conditions with rods used in dim light. The rods and cones both have light-sensitive proteins called opsins that absorb light at specific wavelengths; the variety allows sensitivity to a range of colors. The team says that 99% of all vertebrates have just one opsin protein in their rods making most color-blind in dim light.

Deep-sea fish living 200 to 1500 meters below the surface tend to be no exception. Scientists say at those depths it’s very monochromatic with fish typically only seeing blue light. However, there are some exceptions. In examining the genomes of 101 species of fish, the scientists found 13 species that had more than one rod opsin gene.

One fish, the silver spinyfin fish, has 38 of the opsins. Gene sequencing for that fish found that the silver spinyfins were able to pick up a wide range of wavelengths of light meaning they probably saw many colors. The vision is thought to have evolved as a survival weapon.