Farhan Akhtar and Shibani Dandekar to tie the knot in 2020 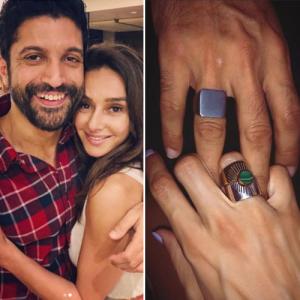 Shibani Dandekar and Farhan Akhtar may be planning on tying the knot in 2020. A report claimed that Farhan and Shibani plan to get married this year. "The plan is to get married towards the year-end, after the release of Farhan's next, Toofan. But they might spring a surprise by tying the knot earlier than that. The final date is yet to be decided but Farhan and Shibani have begun preparations for the big day," it quoted a source as saying.

In March 2019, Farhan wrote a romantic post for Shibani, confirming dating her. "I don't know if you find love or love finds you. Either way, it's a gift from the universe." Shibani and Farhan also shared a picture where they can be seen wearing rings on their fingers and holding hands and soon Twitter was congratulating them on their "engagement".

While they have not talked much about each other, both Farhan and Shibani often share loved-up pictures together. Shibani had told, "I don't feel anything about that (rumours of dating and marriage) at all. We are putting out what we put out. People are going to take it however they want to. Anything they have gathered is from social media handles anyway, so it's not something ‘uncovered' kind of. I just post what I want to, it's as simple there's no strategy or trying to send out a message in any way..."