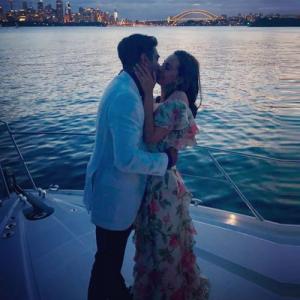 Bollywood actress Evelyn Sharma has got engaged to her Australian based boyfriend Dr Tushaan Bhindi. The actress shared the news on her official Instagram account. Evelyn has been dating Australia based dental surgeon and entrepreneur, Dr Tushaan Bhindi, for over a year now. In the photo, she is sharing a passionate kiss with her fiance in a yacht on the Harbour bridge in Sydney.

Evelyn wore a cream-coloured dress with floral print, while Tushaan chose to go with a navy-blue shirt, paired with a grey blazer for the day. Evelyn had revealed that the two met on a blind date and hit it off instantly. "We met on a blind date last year, which was set up by our good friend. Tushaan is a romantic guy and he's even more filmy than I am," she said.