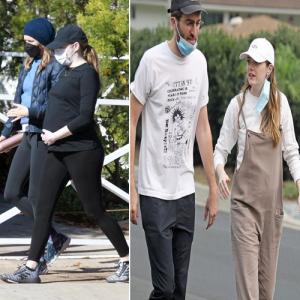 The La La Land actress Emma Stone is expecting her first child with her husband, Saturday Night Live writer Dave McCary. Stone was seen walking in Los Angeles on Dec. 30 with a friend while cradling her baby bump. In the pictures, the actress was seen wearing a tight-fitting black shirt that accentuated her belly, along with leggings and a cap. Her face was mostly hidden in a white surgical mask. She also had a reusable water bottle in her hand.

A source confirmed to E! News that Stone is indeed pregnant, and just "loves married life." The 32-year-old tied the knot with Dave McCary reportedly in September last year, around nine months after they got engaged. The couple announced their engagement in December 2019, just over two years after their relationship in late October 2017.

"She seems very happy and very excited about becoming a mother-she's constantly oohing and cooing. She looks great, she looks healthy, she's glowing," a source told. "She's been keeping up with friends and work lately, she's always staying active and gets her daily exercise in."