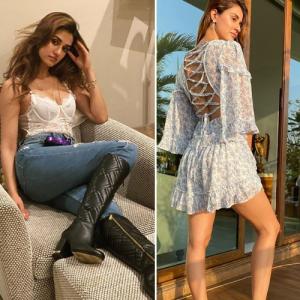 Disha Patani began her acting career with the Telugu film Loafer (2015), opposite Varun Tej. After making her Bollywood debut in the sports biopic M.S. Dhoni: The Untold Story (2016), she starred in the Chinese action comedy Kung Fu Yoga (2017), which ranks among the highest-grossing Chinese films of all time. She went on to play the romantic interest of the lead male character in the commercially successful Hindi action films Baaghi 2 (2018) and Bharat (2019).

Disha Patani is currently self-isolating at her house with family. The actress has been sharing inside glimpses into how she's keeping herself occupied during the lockdown. On Friday, Disha shared a selfie and a boomerang video of herself on her Instagram story feature, showing her quarantine mood. In the video, Disha zoomed in on her face to show mosquito bite mark. Disha has been rocking lockdown fashion game by sporting some uber-cool summer outfits.