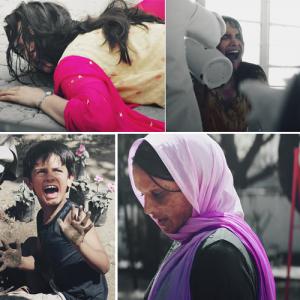 The trailer of Deepika Padukone's most ambitious film 'Chhapaak' is out. While the trailer of the film which gives us a glimpse of acid attack survivor Malti and how she digs deep after the harrowing incident to emerge out as a fighter has been winning hearts. In the film, Deepika will be seen as Malti, who was attacked with acid on a street in New Delhi, in 2005.

Deepika is playing the role of acid attack survivor Laxmi Agarwal in Chhapaak. The trailer shows the journey Malti (Deepika's character in the film). How she hates her face after the attack and learns to love it. The trailer also shows how Malti leads a campaign to prevent acid attacks in the country by regulationg the sale of acid. It also shows how Amol (Vikrant Massey) helps her in the journey. Glimpses of Amol and Malti's brewing love can also be seen in the trailer.

While Deepika is the main focus of the trailer, we also get a glimpse of Vikrant Massey, who plays the role of Amol, a social activist (and later Malti’s partner) inspired by the character of Alok Dixit. Through her story, the film makes an attempt to understand the on-ground consequences of surviving an acid attack in India, the medico-legal-social state of affairs that transpires after the acid has been hurled and the face is irreparably burnt.

Laxmi Agarwal was attacked in 2005 when she was just 15 years old. The attacker was a 32-year-old man who was trying to make advances towards her. Laxmi battled for life after the attack. After surviving the attack, she started a campaign called Stop Sale Acid to regulate sale of acid in the country.