Biggest bird sculpture in the world from India, List of 10 tallest statues 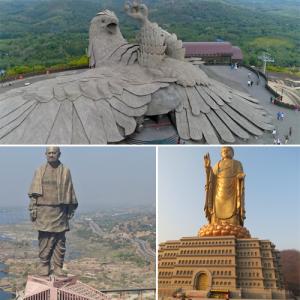 At 200 feet in length, 70 feet in height and with a wingspan of 150 feet, this is the biggest bird sculpture in the world. The colossal concrete structure in the heart of Kerala in India, called Jatayu Earth's Center, took six years to build. It was the brainchild of Indian filmmaker and sculptor Rajiv Anchal, who always dreamed of bringing the mythical bird Jatayu to life.

According to Hindu legend, Jatayu witnessed princess Sita being kidnapped by the demon king Ravana. When Jatayu tried to stop Ravana, he chopped off one of the bird's wings with his sword. In keeping with the story, the concrete version of Jatayu only has one wing. The fact that it's on its back with its talons curled up and its mouth open signals pain. The giant sculpture can be reached via a winding footpath or by cable car. A helicopter service can also be arranged.

Visitors can roam around the bird and scale its wings. There are also various rooms and exhibition spaces inside the sculpture. Guests can get a bird's eye view of the surrounding countryside via an observation deck located inside the animal's eyes. The area around the bird has been turned into an adventure eco-park with activities such as abseiling, zip-lining and rock climbing on offer.

We present the list of tallest statues in the world as of today. Have a look-

Statue of Unity
The Statue of Unity, portraying Sardar Vallabhbhai Patel, one of the founding fathers of India, during its inauguration in Kevadia, in the western state of Gujarat, India, on October 31, 2018. The monument, standing 597 feet (182 meters) tall, is now the tallest statue on Earth.

Spring Temple Buddha
Stairs lead up to the 420-foot (128-meter) Spring Temple Buddha statue, now the second tallest in the world. The statue stands near the town of Zhaocun, in Lushan County, Henan, China, and was completed in 2008.