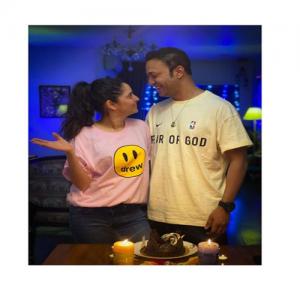 Actress Ankita Lokhande and boyfriend Vicky Jain are some of the much-adored couples of the small screen. Now and then, they share lovable posts on social media and catch the attention of their fans. On Sunday, Ankita Lokhande posted a couple of loved-up pictures of herself and Vicky Jain. In the photos, the actress looks adorable in a peach tee and jeans while Vicky Jain can be seen wearing a cream t-shirt and denim. They can be seen celebrating some occasion with a cake. Sharing one photo, Ankita Lokhande wrote: "'The tides move in harmony with you'," while the caption on her another picture read: "Worlds change when eyes meet."

The pictures were clicked at their house where the two of them were seen standing next to a table on which there was a lighted candle and a cake. The post caught the attention of not just their fans but also their friends including actor Sana Makbul who wrote, "My cuteness @lokhandeankita and my BFF @jainvick god bless you both" and TV actor Ashita Dhawan who commented, "Beautiful edit."

The couple recently celebrated their third year of togetherness on April 10 this year. On this occasion, Ankita shared a video that shows the two of them dancing alongside the caption reading, "Teen saal 3 years of togetherness."

Her relationship came to the limelight soon after the death of her ex-boyfriend and actor Sushant Singh Rajput last year. Some people would troll her and pass negative comments on social media. Ankita has a lot of times came out on the public front to bash these people. Not only this, but she has even thanked Vicky for being her constant support.

Speaking about her breakup with Sushant, she told Bollywood Bubble, "For me, it was very difficult but my family stood by me. My life was finished. I was just finished. I did not know what to do after that. I am not blaming anyone. He chose his way. I gave him the full right, ‘Chal, yeh teri zindagi hai (it’s your life), you can go on."

For those unversed, Ankita and Sushant started dating during their daily soap 'Pavitra Rishta' and called off their 6-year long relationship in the year 2016.

In terms of work, Ankita Lokhande is best-known for her performance in Pavitra Rishta that also starred her ex-boyfriend and late actor Sushant Singh Rajput. Ankita Lokhande has also worked in TV shows such as Ek The Naayka and Shakti - Astitva Ke Ehsaas Ki.

The actress made her Bollywood debut with Kangana Ranaut's 2019 period-drama Manikarnika: The Queen of Jhansi. Her last Hindi film was Baaghi 3, which starred tiger Shroff in the titular role.