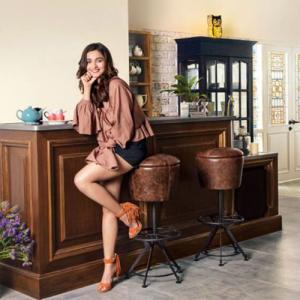 Alia Bhatt will next team with Aditya Roy Kapur, Sanjay Dutt, and Pooja Bhatt for Sadak 2, a sequel to her father's crime film Sadak (1991) and will star alongside Ranbir Kapoor in Ayan Mukerji's fantasy film trilogy, the first of which is named Brahmāstra. She will then appear alongside N. T. Rama Rao Jr and Ram Charan in the Telugu-language period film RRR, and will portray the titular gangster and madam of a Kamathipura brothel in Gangubai Kathiawadi, a biopic directed by Sanjay Leela Bhansali. Bhatt has also committed to feature alongside an ensemble cast in Takht, a historical drama directed by Johar.

Alia Bhatt has reportedly designed her new office space that she plans on using for work-related meetings post the lockdown. Alia has collaborated with the art director of her movie Dear Zindagi, Rupin Suchak, to come up with her new, beautifully designed and elegant looking workplace.

Pictures of Alia's new office space have been share online and they look breathtaking to say the least. The area is spacious and combines her love for nature, that is flowers and plants, with elegant decor. Her new office space has overpowering hues of yellow and is called Eternal Sunshine. Alia's affection for pets, especially her cat Edward, is also evident in her new workplace as a symbol of the feline animal adorns the official logo of her office.