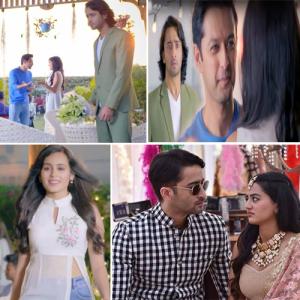 Yeh Rishtey Hain Pyaar Ke is gearing up for new twists and turns. Mishti and Abeer's separation is finalized, Abeer refuses to keep any relationship with Mishti. Abeer makes it clear to Mishti that he has no love in his heart for her. Mishti is all shattered and thus Vishambhar asks her to go to London and Mishti agrees. While here she goes to temple to take God's blessings and here she sees Meenakshi distributing sweets and celebrating her victory. Mishti is shocked as Meenakshi offers sweets to her as well, Mishti curse Meenakshi that she will lose her both sons.

Now Abeer and Mishti's life takes a shocking turns and show heads for a leap of three months. Abeer and Mishti will again come in front of each other. Abeer is enjoying each and every moment of Neha's wedding and shows his casanova avatar. Abeer is trying to flaunt himself and get out of the trauma of losing Mishti. While Abeer's hot shot casanova swag will all come to an end as Mishti will mark her entry. Mishti will mark entry and is happy for Kabir, Mishti's entry will shock Abeer and will make him recall the past.