5 Reasons why red colors is an auspicious in hinduism 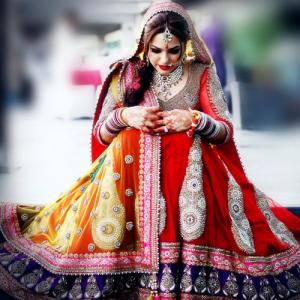 Red symbolises power or Shakti in Hinduism. Red is an auspicious and sacred color used widely in social and religious functions of Hindu culture. It is a symbol of love, ardent affection passion and sacrifice.

The Sindoor
According to popular beliefs, sindoor or vermillion is the symbol of Goddess Parvati or Sati. According to Hindu astrology, the house of Aries is on the forehead. The lord of Aries is Mars. Since the colour of Mars is red, it is believed to be auspicious. It is the sign of soubhagya or good fortune.

Red Bindi
Bindis hold a special place among Hindu women in India. In Hindu dharma, married women should wear a red bindi which is a round dot applied on the forehead. Wearing a bindi is believed to invite auspicious vibrations and helps protects the woman and her husband from all dangers.