10 Most marvellous but scariest lifts of the world 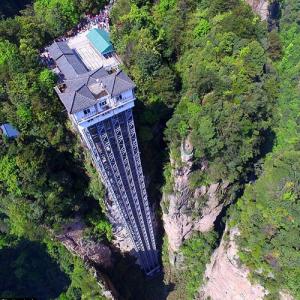 Sometimes the journey is more incredible than the destination itself - as these jaw-dropping elevators prove. Travel has rounded up some of the most incredible and exhilarating lifts from around the world, where the ride to the top is as thrilling as the view.

Bailong Elevator, Zhangjiajie, China
The formidable Bailong Elevator, also known as the 'hundred dragons sky lift', is situated in Wulingyuan Scenic Area in central China. The 13million Euro project took three years to build and has attracted a large number of tourists to the area. Zero to 1,070ft in two minutes: The structure is composed of three separate elevators, each of which can carry up to 50 people at a time.